Spending the day with Ras Creek "The Original Rasta" that trained the Stingrays at Belize's first Shark & Ray Reserve. This beautiful Sanctuary was discovered many years ago and was made a reserve back in the early 80's. The man in the video, Ras Creek is a pioneer when it comes to official tour guides on Caye Caulker. He is simply the best at giving you the history of the island and if you want to be a part of what's going on during the tour this guy allows you to be an active participant in your tour. When we first met Ras Creek and his colorful boat, my first thought was what are we getting into, we had our camera crew a host prepping for this tour but not really knowing what to expect. The minute that we stepped into his world he took us on this incredible journey and then half way through the boat ride we stopped in the middle of the Caribbean Sea and we got a chance to become one with nature. This behind the scenes footage just gives you a small "Taste Of Belize" and what the country has to offer. Please continue to follow the Blog and be a part of what we are doing at The Belize Film Commission. We look forward to sharing our country and our experiences with you. Happy New Years


Nigel P. Miguel
B.F.C.
Posted by Filmbelize at 4:01 PM No comments: Links to this post

Everybody Wants To be A Star

Good afternoon and Happy New Years to everyone. I hope that everyone is still feeling festive and very optimistic about Belize and the possibilities of the upcoming year. We hear at the Belize Film Commission have a new mascot for the office, he is our new poster boy and he wanted to introduce himself to the world. His name is Wally Gator, and in the video he is enjoying his Christmas dinner. Wally is a cute little guy about 24 inches long and he loves raw chicken parts. Recently Wally was a part of a documentary that was shot here in Belize. Wally liked the cameras so much he decided to stay around and see what other parts he could get. He is a classically trained Alligator that will work for food. He has an agent & manager for local and international bookings. If interested in hiring him please call 011 501 207 1035. You will be able to see more of Wally from time to time making special appearances on the Blog and on Youtube. Please be safe out there tonight while you are bringing in the New Year, good by for now and we will see you next year.


Nigel P. Miguel
B.F.C.
Posted by Filmbelize at 11:15 AM No comments: Links to this post 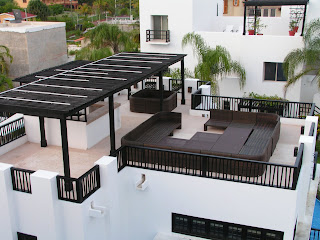 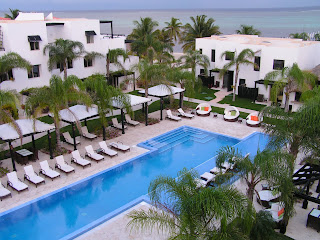 These views say so much to so many people, we sort of get spoiled and tend to take it for granted that the beauty of Belize isn't something special. While filming the TV Series "The Taste Of Belize" we were very fortunate to be able to film at the Las Terrazas Resort. Las Terrazas is one of Belize's newest high end properties that is very elegant but yet affordable for the amenities that you get on property. The commitment from the owners, The Camden Group to enhance the natural beauty of the coastline of the island is only matched by the precision to details that you see in every single unit that you go into, no guest is left wanting. I see big things for the resort and the island of Ambergris Caye, Belize is ready for the big time and with places like Las Terrazas leading the way we will reach a new level of excellence in the very near future. I truly enjoyed working with the staff while we were filming and the property is really production friendly. I look forward to going back and using them again for another production. 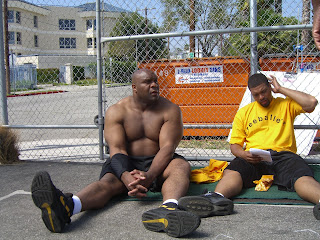 Actor DeRay Davis, the star of stage, screen, and the US comedy circuit is looking at Belize as a possible location for a showcase for his talent. The Belize Film Commissioner, Nigel Miguel work with Mr. Davis 2 summers ago on an Urban Comedy called Frankenhood. The movie was directed by Rashidi Harper who happened to be a big basketball fan and hired Mr. Miguel as the basketball coordinator for the film. The movie starred, such household names as JB Smoove (Curb Your Enthusiasm), Charlie Murphy (The Chappelle Show), Hassan Johnson (The Wire) & Big Bob Sapp (The Longest Yard). Comedian JB Smoove is on tap to open the Belize Film Festival next year July 16th to July 25th, 2010. Last years festival was a huge success and NICH and The office of the Belize Film Commission will hold a special 3 day celebrity event on San Pedro, Ambergris Caye that will highlight 3 international films and local Kriol Musicians playing for our VIP guest. There will be special packages for people that want to come to the event and stay over on the island. Please stay tuned for more information on the event and the adventures of the Belize Film Commissioner.


Nigel P. Miguel
B.F.C.
Posted by Filmbelize at 10:36 AM No comments: Links to this post 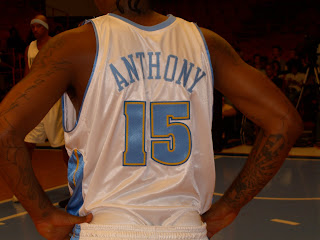 Is this the jersey of the 2009/2010 MVP? Carmelo Anthony might be filming in Belize during the off season. Boy wouldn't it be nice to have the current NBA M.V.P. come to our shores and enjoy the Jewel. Carmelo's team mate Kenyon Martin gave Belize such high praise after his visit Carmelo told me that he would definitely like to visit Belize in the near future. Melo I hate to tell you that Belize is Laker country, but for you I'm sure that we'll find a lot of Nugget fans here. Surprisingly Colorado sends a very high number of tourist here during the season. I think it's because of the awesome dive sites and the raw pristine beauty of the country. Nugget fans don't be left behind, get your tickets and come enjoy Belize during the month of July, when the annual Belize Film Festival is taking place. Date July 16th to July 25th, we have a lot to offer.

This is a video of Big Shaq on the set of our Verizon Commercial at Universal Studio lot back in 2005. The Superbowl commercial had a host of stars, Kid Rock, Deion Sanders, Cristina Aguilar and the daddy of them all Shaq. Shaq was with the Miami Heat at that time and he was a little down after the losing to the Clippers the night before the shoot, but he still new that Belize was the spot even back then. The commercial was directed by Kinka Usher and it was the genesis for the first Verizon Webisode "BarberShaq" which starred Shaq as a neighborhood barbershop owner who would have all his celebrity friends come by and shoot the breeze with him. The first episode starred him and a pre-oscar Jaime Foxx as they talked about Shaq's departure from the Lakers. Well now it's 2009 and Shaq still loves Belize and he's looking to come down and hangout in the country during the off season. 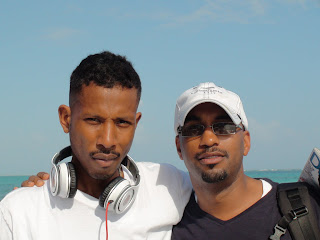 The meeting finally took place and director Tim Story & The Artist know as "Shyne" finally sat down and talked about his life and his life story. The creative juices were flowing and you could see that both men were feeling the positive energy and that we were here together because of a higher calling. Shyne had the stage and he held his audience captive. There was a small group that attended the meeting and everyone left there convinced that we were a part of something special. I would like to thank God for bringing us all together, thank Tim & Shyne for agreeing to the meeting. I would like to thank my partners Herb Dogan & DJ Alemayehu for making it possible for this to take place in Belize. I would also like to thank our host, Sari Franks and La Perla Del Caribe for housing everyone during our 3 day summit.

Posted by Filmbelize at 4:33 PM No comments: Links to this post

Well folks we have a monumental event occurring in Belize on the 10th of December, director Tim Story is visiting our beautiful country. This visit was put together by a friend of mine Herb Dogan, who is an American investor in the country of Belize. Tim will be here in Belize for 4 days looking at the sites, meeting people that will impact the local film industry and enjoying some Belizean Hospitality. As the Film Commissioner of the country, I look forward to these types of opportunities to show off what we have to offer as a potential filming destination. We welcome you Hollywood with open arms.

Go Belize
Nigel P. Miguel
Posted by Filmbelize at 7:31 AM No comments: Links to this post