Affordable Islands of the Caribbean
By Glynna Prentice


I’m paddling idly in the cool waters off the Split, wondering if I should drag myself to the bar of the Lazy Lizard for a beer. I’ve spent the morning snorkeling off the Barrier Reef, viewing coral formations and brightly-colored fish. Now, with evening coming on, I’m taking a last swim in Caye Caulker’s best-known swimming spot before showering and dressing for dinner. Though here, "dressing" is pretty casual... it means I’ll probably put on flip-flops rather than going barefoot. Probably.
These days Caye Caulker, a five-mile-long island off Belize’s Caribbean coast, has the laid-back, beach-bum vibe that brought expats to nearby Ambergris Caye 20 years ago. The streets on Caye Caulker are still packed sand. Most people get around by bicycle. And for those who come here, life is all about the water. 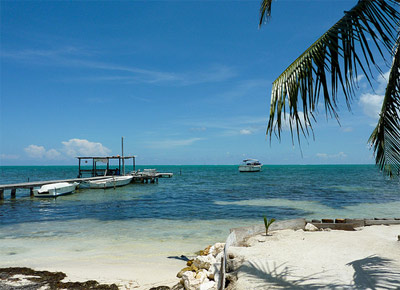 Small-town, island beach life isn’t for everyone. But if it’s for you, it doesn’t get much better than Caye Caulker. And real estate here is still surprisingly affordable. Lots, depending on where they are, can run well under $50,000. Simple vacation cottages start at less than $100,000. And on an island this small, no place is far from the beach.
If you want to be near the action—the restaurants, bars, dive shops, and Internet cafes—look at properties in the village along the three main north-south streets. (They’re named Front, Middle, and Back.) The village is the most expensive part of the island, especially for waterfront, but you can still find bargains.
A small two-bedroom, two-bath on Middle Street, for instance, was recently for sale for $225,000. It’s not on the water—but the island at this point is only three blocks wide, so the sea is very close. Want an easy business? A large, fenced property near the village is going for $279,000. It already has four cabanas on it that are vacation rentals, with plenty of room to build more.
Most expats, though, tend to settle well south of the village area, where they can enjoy greater privacy and quiet. There are some neighborhoods here, with names like Bahía Puesta del Sol, Pelican Point, and Eden Isle. You’ll find a few homes for sale—for example, a 720-square-foot, two-bedroom home, with three extra rooms for short-term rental, is currently for sale for $178,000. But much of this area is still jungled undergrowth, and people tend to buy lots to build on. Eden Isle is still off the grid.
You get great bang for your buck on this part of the island, yet you’re only a 10- to 15-minute bicycle ride to town. A 5,400-square-foot corner lot near Caye Caulker’s southern tip, for instance, with sea views in two directions, was recently on offer for $49,000. One row back, a lot just as big was going for $34,500.
In Caye Caulker you can build homes up to three stories high. And while you can build a large, luxurious home, you don’t have to. One expat couple I met settled for a simple, one-bedroom wooden house by the sea, with an outside deck for enjoying their morning coffee. The house was built to order by workers from Belize’s industrious Mennonite community... who showed up at the lot one morning and put up the house in a flat seven days. The cost: just $10,000.
And the lifestyle: priceless.